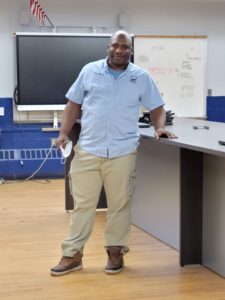 Abayomi Wilson, Information Systems Technology DH at Windham Tech, did not want to be in the spotlight. In fact, he tried to track down the person who recommended him for this article. But when Wilson started talking about his students and their accomplishments, he glowed with pride.

For several years, Wilson has involved his students in CyberStart America programs and competitions. It started with CyberGirls. As the name implies, this competition was only for girls. Wilson’s girls performed very well, placing third in Connecticut and making the national teams.

CyberSmart America is a four month long online competition that is intended to identify and recruit students to the cybersecurity field. High schoolers around the country must complete a series of challenges related to cybersecurity. Students do not need to have any prior knowledge of cybersecurity to participate. While these challenges are referred to as gamification challenges, Wilson made it clear that his students were not just playing around. Students had to apply what they were learning in challenges to cybersecurity puzzles, code breaking, networking, and more. And, all of this had to be done as a supplement to their already full IST curriculum.

In 2020, Governor Lamont announced that Connecticut would again be participating in CyberSmart America. For the first time, the program would be open to all students. Wilson shared that this was an amazing opportunity for his IST students for many reasons. As one would imagine, IT and cybersecurity specifically, are high need and ever-changing fields. No matter how robust a curriculum, it is challenging to keep up. Through this competition, students are introduced to problems and solutions that are relevant right now.

Hire Us for Your Next Project

Student Workforce is a business run by students and faculty at the CTECS.